Been working on a collaboration with Marcel Bakker the last couple of weeks. I am drawing the bottom half of a drawing of which he did the top half. He covered the top half with paper only leaving an inch wide strip for me to work with. We call this type of collaboration an Exquite Corpse. I started doing these with some other artists a couple of years ago when I joined a club on the Deviant Art web site called "The Exquisite Corpse". This particular drawing is being done in ink and is about 11 x 17 inches (more or less). When I finish, I will upload the final image. The last two we did were colored images. I started one, and he started the other. I painted an abstract painting, very simple, then scanned it, and emailed it to Marcel. He then used a pen to draw a picture based on the color patterns. Since it was an Exquisite Corpse collaboration, he only drew one side, then covered it except for an inch wide strip and mailed it to me. I finished it up, took off the paper, then got to see the final image. We called this one "The Abyss of the Mind". 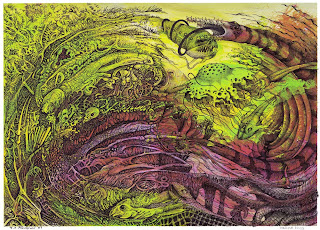 The Abyss of the Mind
Marcel also did a color image, emailed to me, and I did half, then mailed him the other half so he cold finish it up. Both of these two images turned out very nicely. In fact, one of them, "Just West of Eden", received a Daily Deviation on the Deviant Art web site and has already been viewed over 15,000 times on that site alone. 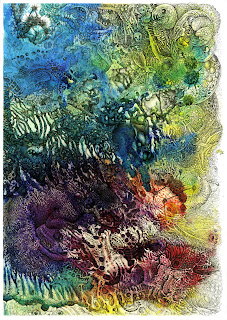 Just West of Eden
I got a better image of one of my latest pieces. I decided to call it "Vent", as in, the main figure appears to be "venting" or relieving himself of some sort of physical stress. This particular one is 24 x 24 inches in size. I did this one on birch plywood that I had primed with white latex paint. I then applied thinned acrylic paint. After it dried, I used a pen to pull out detail. I decided to leave some areas with no ink on this one. 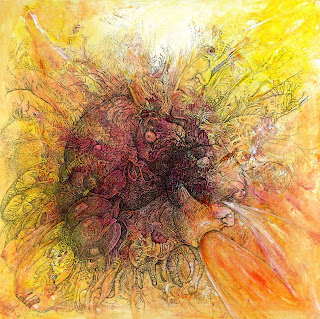 Vent
Posted by Joe MacGown at 5:18 PM No comments: