Opening Reception for my show at the RAC a done deal

The opening for my show at the Rosenzweig Arts Center (RAC) in Downtown Columbus, MS was last night (August 1st, 2013) from 5:30-7:00 PM. I thought it went really well. Lots of folks showed up. In fact, people starting arriving before 5 PM and some did not leave until about 8 PM. They  basically had to turn the lights off to get us out of there!


The crew at the RAC did a wonderful job with the show. It was hung nicely with some natural flow and certain pieces grouped together in meaningful ways. Lots of good food and wine and even homemade ice-cream with toppings! Cookies, brownies, all sorts of goodies.  They had a video that I had prepared of my work with music composed and performed by my son Joseph playing on a widescreen TV. That was pretty cool. Special thanks to everyone at the RAC, especially Renee Sheridan, who coordinated much of this show! Also thanks a million to Mark Wood, owner of the Chalet, who has helped me with framing and printing for several years now. Without him, I could not have these shows! 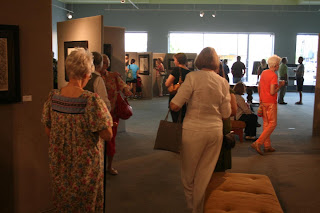 I would guess I had at least 75 originals framed and hung, and lots of prints for sale. Sold at least one bigger original and quite a few prints. Hopefully, more will sell throughout the month.


I met some very interesting people at the show, such as Bernie Imes who is a noted photographer; April Wallace, also a photographer; and many others. I finally got to meet Ali Fratesi and her boyfriend Dustin Pinion, a wonderful young couple who are practicing organic farming. They have apparently liked my art for some time, and finally got a chance to come to a show!


Also saw some old friends such as Tiffany Holder, who drove all the way down from the Smokey Mountains, and Susie McGovern, who now lives in North Carolina. Great to see those crazy chics.

My high school art teacher, Nelle Elam, and her buddy Fay Fisher were there checking out the scene, as was awesome Starkville artist Liz Johnston.

Some of my running buddies made it over for the show including Brent Wallace, Arash Taheri, Jorge Villarreal, Will Kallfelz, and Chad Anderson! Brent and Chad are also artists, so I think they appreciated the show.

Folks seemed to enjoy the art. Many had questions, especially about how I did the color pieces and also how the collaborative works were done. People were super interested in the idea of doing collaborative pieces with other artists from around the world!
Finally left the show just after 8 pm. Took Joseph and Audrey out to eat at Harvey's before heading home! A nice finish to a great evening.
Posted by Joe MacGown at 3:22 PM No comments: