Finished up a few pieces this week and of course progress on others!

Some of my art takes a long time to do because of the ridiculous amount of details I enjoy adding. It is not unusual for me to start a piece of artwork and then put it away for years before coming back to it. In many cases, I come back to working on it multiple times. This week, I have more or less finished a few older pieces and plan on framing them this week! Also I finished up a new commission that was pretty fun and full of bright ink colors!
Posted by Joe MacGown at 10:36 AM No comments:

Wowzers! What a year. I retired from my job as a scientific illustrator/research technician on July 1, I got remarried on October 10 to Jennifer, a wonderfully creative lady, and we have made lots of progress on building an art retreat at our property located in Sessums, Mississippi.

Yep, I have long wanted to create an art retreat of some type where people can come look at art, create art, participate in art and music events, to enjoy and learn about nature, and even to start an artist in residence program. The idea sounds a bit crazy, but I believe it is feasible.

We plan on turning the existing house into a place for resident artists to stay while visiting and using other rooms as inexpensive sleeping options for various guests who may be at an event or something. We will be building a small cabin near the pond to live in, which gives us this amazing option! If all goes well, we are hoping to be ready by the fall of 2021. We already have a functioning studio, are about 80% complete on a cool art cabin/studio, have started building a gallery/workshop, and have a cool pavilion on the pond, which would be perfect for musicians to play on!


One goal is to have an artist in residence come stay for one to three weeks, with perhaps 3-4 artists per year. I would like each artist to leave their footprint on the property in same way such as creating a sculpture, painting a mural (or helping), doing a painting, or some other expression of what they do. Also, I am hoping to have artists conduct workshops in the gallery/workshop building that I recently started building.

I am looking forward to completing these projects so we can get started on hosting art events as well as showcasing our own art!

Selling Art During a Pandemic

Wow, it has been a crazy spring with the Covid 19 Virus Pandemic effectively shutting down many businesses either temporarily or permanently. Of course, all festivals, art walks, and gallery and museum exhibitions have been canceled or postponed. This has made selling art difficult. Fortunately we have social media. Never has there been a time for an artist when social media was more important than now, and boy I have been posting a lot of art. And guess what, this spring has been my best art selling year ever, already! So, thanks very much to all of our great followers, supporters, buyers and others who have helped during this difficult time.

Here are some fun shots from my studio from the last week. Many of the originals in the photos have been sold! No worries, I have plenty left as does Joseph. But if you want something, don't wait, cuz it moving. Thanks.

Almost everything in these pictures was framed at Chalet Arts! If you are an artist around here and you are not framing your work there, then you are making it more difficult to sell your art. A great frame that showcases your work makes it much easier to sell and showcase your art. And the staff at Chalet Art are fantastic about working with local artist. Talk to them and form relationships. You will thank me later. 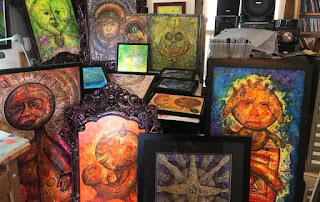 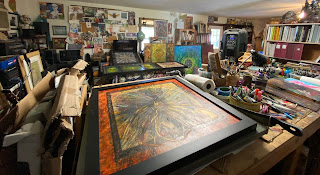 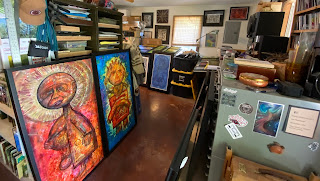 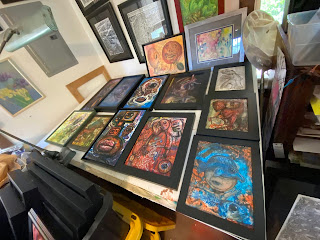 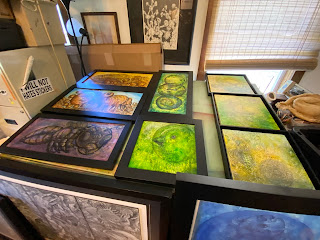 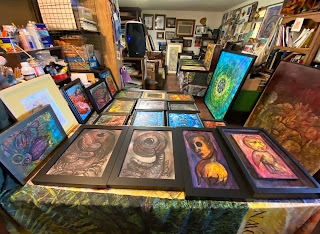 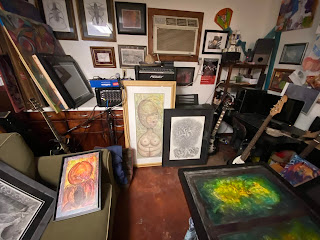 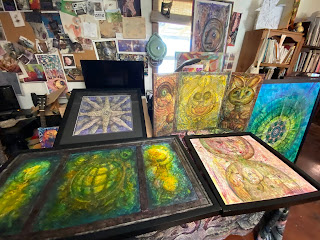 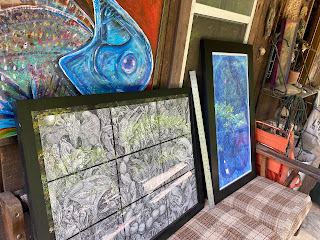 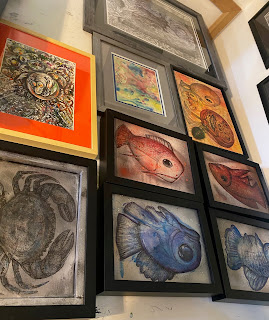 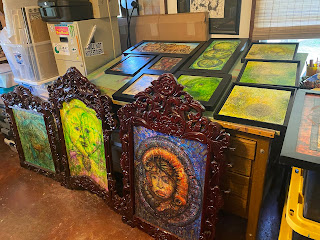 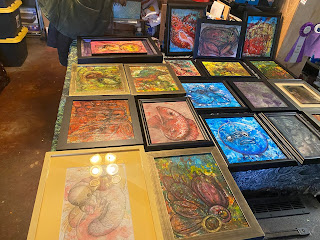 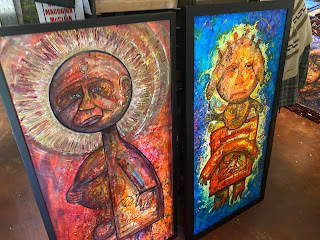 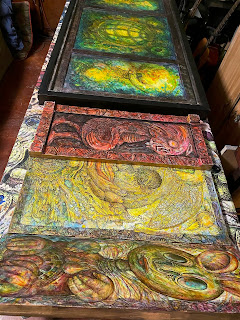 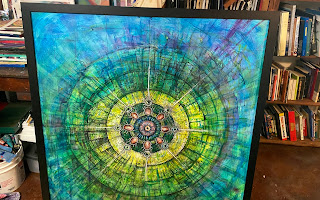 Posted by Joe MacGown at 1:38 PM No comments:

Arthrobryozoic Naiad heads to the Meridian Museum of Art

So I entered the 46th Annual Meridian Museum of Art Bi-State Art Competition, 2020 and got my Arthrobryozoic Naiad piece accepted. This is a fun piece I did last year that can be viewed at different angles and has lots of cool layers. It is 24 x 48 inches and done entirely with blue ink on primed birch plywood.

I often enter this competition and have had some luck with awards. It is always a great show with lots of talented artists from Alabama and MIssissippi. As in other years, quite a few art faculty members will have art in the show, which is great!

This year's juror is Stephanie Smith, an artist, printmaker, and educator. She earned her B.F.A from the Atlanta College of Art and a M.F.A. with Distinction from the University of Georgia in 1997. Smith is a Senior Lecturer at the University of West Georgia where she teaches drawing, 2D design, printmaking and book arts as well as serving as gallery director. In 2005 she co-founded the non-profit arts organization the Atlanta Printmakers Studio and served as President for the first five years. I imagine selection of accepted pieces was not easy with 322 entries by 114 artists entered. At the end of the day Smith selected 65 works by 51 of those artists.

Definitely come check this show out and the historic museum itself. Exhibition dates are March 10 - May 16, 2020. There will be an awards reception from 2 to 4 pm on Saturday, May 16, 2020. Please come and join us for what I am sure will be another great show. I personally am looking forward to the reactions to my piece, which could be considered a little risque.


Here is the  list of artists who will have work in the competition/exhibition:

Posted by Joe MacGown at 3:11 PM No comments:

Whew, 2019 was a busy year, so busy I did not do much with this blog even! 2020 is shaping up to be no different. My son Joseph MacGown who is in his senior year (or should we say first senior year?) and I have numerous festivals and art walks coming up.

If all goes well and our application is accepted, our first outing of the year will be March 21 in Starkville at the Queer Art Market, which is part of the PRIDE event. We participated the first year, but missed last year due to a conflict. The next Saturday, March 28, we are hoping to be a part of the Hub Fest in downtown Hattiesburg, MS! Then on Saturday April 4 we will be setting up two booths at the Threefoot Festival in Meridian, MS. It is not too late to enter this and registration fees are reasonable (threefootfestival.com). Also in Meridian, I entered two pieces (Arthrobrozoic Naiad and Surreal Tree of Life) to the Meridian Museum of Art's BiState Competition! Wish me luck.


We will take the second weekend of April off, but will be back at it on April 21 in Starkville with two tents at the Cotton District Arts Festival. We have lots of cool art stuff for sale including originals, prints, tapestries, books, metal prints, postcard, ceramics, and more! You won't want to miss this one!

Then the next weekend on April 28 we will be at the Double Decker Festival in Oxford, MS. We did this one last year and it was fantastic!

Of course our awesome once a month Sunday Funday starts back in May and will run through October. Big changes this year as I stepped down from my two-year term as Director of the Sunday Funday board and artist liaison, though I will still serve in an advisory sense. The new director is Robert Camp, who is a large reason that Sunday Funday is even an event to begin with as it takes place in Starkville's Cotton District, which is primarily owned by the Camp family. We asked Josh Herrington of Dunkington Art to take over the artist liaison spot and he will be amazing. This guy is full of knowledge and enthusiasm. So look for us to be there selling art this year, but look to others for details on participation. I will gladly send inquiries their way!

In other news, we have been in the process of restoring the old pond at our place in Sessums, just outside of Starkville. We built a cool pavilion and pier, which will be ideal areas for hosting art and music events. We are currenting building Joseph a small studio/cabin and in the future plan to build a small gallery to showcase our work and do workshops. Our  studio is located on the property as well, but it's so jam packed with art it is difficult to properly show our art to folks!