Whew, I have not posted on here in a while. But there has been plenty going on. Following the numerous events in April, both Joseph MacGown and I had art on display at the Gumtree Arts Festival in Tupelo on 12 and 13 May and at Sunday Funday on 27 May and 24 June. I had 5 pieces in the "Recent Winners of the Cotton District Juried Arts Show" on display at the Greater Starkville Development Partnership Office in June with the show moving to the West Point Arts Council gallery later in June (up through August). 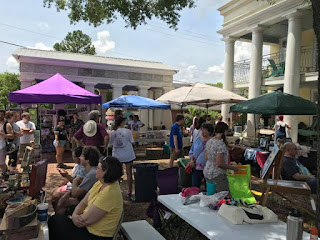 Our next Sunday Funday is this coming Sunday, 22 July 2018, from 1-6 PM near the Parthenon on University Drive in Starkville. This kid friendly event is really growing and we will have four musical acts featuring Bryce Mitchell, Brent Varner, Nick Crews, and Flathead Ford; there will be about 30 art vendors there; some light food vendors; art activities for kids in the Parthenon; and more! Come see us. The first two were hot, but a blast!

Joseph and I completed three large paintings commissioned by Jay Yates, co-owner of the Veranda Restaurant in Starkville. Each piece was about 7 x 3 feet and they are hanging in the veranda section!

I have been busy working on various projects including a recently finished piece called "Parasitism", which is an ink on wood work about 22 x 32 inches. 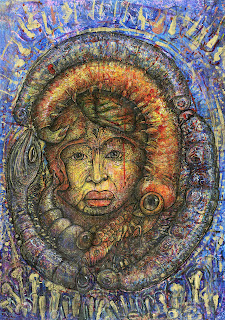 Posted by Joe MacGown at 7:11 PM No comments: