I started this triptych in April of 2016 and have more or less finished it up about Thanksgiving of the same year. I basically worked on this some every day that I was in town, sometimes in the morning before I went to work, at lunch, then later in the evening. Some of those times I also worked on other pieces, but needless to say, I have a lot of time in this.  The images I have provided below give an idea of what it looks like, but its much more radiantly colored actuality. This a traditional type of triptych done on wood with a center panel and two hinged doors that close. Both the inside and outside of the doors are painted, and the edges are painted with metallic gold paint. After priming the birch plywood, I used layers of colored ink washes and added fine detail with Koh-i-noor Rapidograph technical pens. When open, the triptych is 40 x 24 inches, when closed fully, it is 20 x 24 inches.

Joseph and I will have prints, postcards and stuff for sale at 929 Coffee from 5-9 pm on December 3, 2016. Quite a few other local artists will be selling art as well. 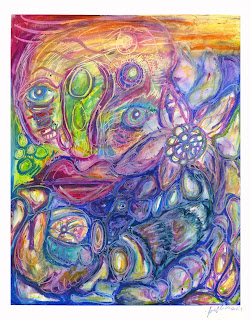 Thanks to 929 for once again inviting local artists to sell their work and thanks to Chalet Arts for making high quality prints for us. 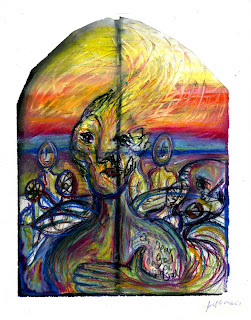 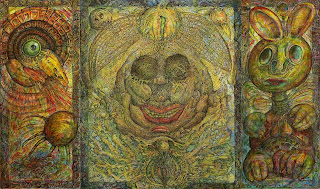 Artists who will be present include:

MacGown art at The Odd Ball at the Almost Circle Gallery, Biloxi MS

Joseph and I will both have  some colorful, slightly trippy art hanging in the Almost Circle Gallery in Biloxi, Mississippi for the "Odd Ball" show. The opening will be from 6 to 10 PM on Thursday, 27 October 2016. The gallery is located at 128 Rue Magnolia, Biloxi, MS.

Thanks to Julia Reyes, co-owner of the gallery for the invitation to have some of our art there. This show is basically a trippy surreal Halloween art bash complete with live music, entertainment, interactive art, and other strangeness. Costumes and weirdness are encouraged.  The gallery is super cool, and if you are in the area, I invite you to join us next Thursday.

The Prairie Arts Festival, which was held in West Point, MS on Saturday, September 3, went pretty well for us. It was another hot day! But, we met some cool folks and saw lots of friends and art appreciators. We did not make as many sales this year as the previous year, but we attributed that in part to MSU having a midday football game, which meant that most of the folks in the age range who typically buy our art were not present at the festival. But, even so, it was worth the trip over. Also, I won first place in the Drawing/Mixed Media division of the Juried Show with my "As Above, So Below" piece!

This Thursday, the Starkville Area Arts Council Abstract show opens at 200 Main Street, downtown Starkville, MS. Check it out. Some cool and colorful art! Joseph and I both have two pieces in the show. Mine are both small pieces with one being a very abstract acrylic painting with even the frame painted (called "Five"), and the other one (Baxter's Journey) is a print on canvas, which I touched up with a pen. Each of these are only $100! I had planned on bringing the original "Baxter's Journey" for the show, but after posting it on FaceBook, I sold it almost immediately. Below are images of these pieces.


Joseph's has two nice pieces in the show with my favorite  being a 2x2 ft painting on wood entitled "Overlapping Forms" ($225) and a nice little pastel piece called "Organic Improv" ($125).

I have five pieces in an exhibition at Studio 230 in downtown Cleveland, MS. Opening reception is set for 4 pm on Saturday October 1, 2016. Looks like an awesome show if you can make it! The artists in the show include Sammy Britt, Floyd Shaman, Gerald D. DeLoach, Tommy Goodman, Bill Lester, Thad Brewer, Robin Whitfield, Katherine Pearson, Selena Nause,Nanette Long, John Campbell, James Moss, Cetin Oguz, and Joe A. MacGown.

Here are the pieces I will have in this show.

Our wonderful Antipodes collaborative drawing project is finishing its run in Washington D.C. as the show is coming down on August 29. Following that, we will work to finish up the fourth piece, and perhaps start some more, as well as look for other types of creative collaborations, and future venues for the  works.

My son Joseph and I will have a tent full of art for sale next Saturday, 3 September 2016 at the Prairie Arts Festival, which will be held in the Sally Kate Winters Park in West Point, MS. We will have post cards, a variety of sizes of archival prints in sleeves with backing board, my two art books, and original art for sale. Come on by!

My piece entitled "Going Green" travels to the Galerie Flox in Dresden, Germany as part of the traveling group show, "Art for Peace" curated by Liba Stambollian. This show has an all star caste of artists included, and I am glad to have a piece in it. The show runs from 28 August to 20 October, 2016. For more info, check out Otto Rapp's Visionary Blog at http://www.visionaryartexhibition.com/dreams--divinities-blog/july-27th-2016.

Joseph and I will both have two pieces in the upcoming Abstract show in downtown Starkville at the space in the Greater Starkville Development Partnership office at 200 Main Street. The show goes up on 12 September and runs through 7 November with the opening reception from 5:30 to 7:00 PM on Thursday, 15 September, 2016.

I will several pieces in a group exhibition at Studio 230 in Cleveland, MS from 24 September through 3 December, 2016 with an opening reception slated for 1 October.  This beautiful gallery is owned by artists Cetin and Carmen Oguz.

I will be having a one man show at the wonderful Gumtree Museum of Art in downtown Tupelo, MS from 26 January through 11 March, 2017. Opening date has not yet been set. This will be a pretty sweet show with lots of room to exhibit my art! Thanks to director Belle Naugher for setting this up!

Posted by Joe MacGown at 5:26 PM No comments:

The Antipodes Project is a surreal collaborative drawing project started by Washington D.C. artist Ben Tolman in 2006. Thus far, three projects have been completed and a fourth is close to fruition. All four of these projects were done with 005 and 01 micron pens on 11 X 14 inch pieces of Bristol paper (panels). The individual panels were put together to create large pieces. Thus far, 37 very talented artists from around the world have contributed to the project, and we are still looking for more artists to contribute.
The project essentially evolved from the collaborative Exquisite Corpse Club, a surreal drawing club, of which numerous artists including Ben and me created surreal collaborations. Ben's first Antipodes Project, "Novus Natura" was a collaboration between him and Lars Peterson composed of nine 11 X 14 inch panels to form a 33 X 42 piece.
Happy with the results, Ben invited others to participate in more collaborations. I, along with several other artists, contributed to the group fairly early on with various bits of pen drawings. At some point about five years ago, the project seemed to be headed for extinction. Ben was overwhelmed with his creating his own art and the task of trying to get artists to return art. Because I had already done a lot, and because I thought the project was a great idea, which tied into things I wanted to do anyway, I pestered him about continuing the project. Eventually, Ben asked if I wanted to take it over for a while. So, in 2014, Ben sent me several 11 X 14 inch panels, six of which were fully completed and six of which were partially completed. I had worked on many of those 12 panels already, so this made sense that I take over this particular project. At that time, this was to be a 16 panel drawing. I started a FaceBook page for the group, and as we posted progress shots, interest begin to build. Suddenly, the 16 panel project became a 20 panel project! I tied panels together as best as I could from work done by 17 artists from around the world. The eventual project (project 3) I called "Kilroy was Here." Just after finishing this, I hosted an international exhibition at Mississippi State University featuring the works of various surreal artists from Portugal and the USA (LUSO American Surrealism Now). This seemed like the perfect time to showcase this spectacular collaborative drawing that was 44 X 70 inches (bigger framed). Wow! The response from viewers was overwhelming!
Meanwhile, Ben was now reinvigorated! He grabbed some artists to help complete the second project entitled " A Transitional Moment", which was finished up in late 2015 just before "Kilroy was Here" was completed.
The fourth project is currently in progress and is entitled "The Myth."  Ben has mostly been guiding this project, although I have worked on four panels and solicited artists to contribute as well.
These four projects, along with individual works by some of the artists involved, are currently on display through August 29, 2016 at The Fridge Gallery in Washington D.C. The opening reception was held on 29 July 2016. Although I was not able to make it to the reception, it apparently went well. In fact, the awesome art magazine Juxtapoz even had a writeup about it on their web site. Scott Stead and Jonny Goldstein did a live feed video of the show. The next day, Whitehot Magazine published a lengthy online story about the show and the Project.
The Antipodes Project is garnering some great national and international attention. This is wonderful, although not surprising with the caliber of artists contributing!
When the show at the Fridge comes down, I will be taking over the project for a while as Ben will be arting in Germany. This joker is rolling! Future plans include finishing the fourth project, then its wide open. I would like to incorporate color in some future works and a variety of sizes and formats. I would love to have some musicians come together to create collaborative surreal experimental music to tie into this project to be played at shows and to be available online. Video collaborations would be great as well. Certainly, we should produce a book of the artwork, prints of panels, etc. I will be looking for volunteers to assist in these new aspects of the projects as well as gallery directors to host these incredible pieces.