Lots going on lately. Probably too much, but I guess that's how it goes! This fine Thursday afternoon I am inside my studio working on a new piece of art. Why am I here on a Thursday afternoon instead of at work? Snow. Yep. Once in a while we get a bit of snow here in Mississippi, and when we do, it basically shuts everything down. Fine with me. One of the cool things about the snow is you can see all kinds of animal tracks. My yard is pretty wild and attracts a good bit of wildlife. I have deer, coyotes, rabbits, raccoons, squirrels, opossums, armadillos, foxes, some small rodents, lots of birds including ducks (on the pond), snakes, turtles, and various lizards and salamanders (not so much in the winter), and even an occasional bobcat. Just walking about this morn I saw the tracks of several of the mammals, so that was pretty cool! Here are a few pictures of my yard from this morn. 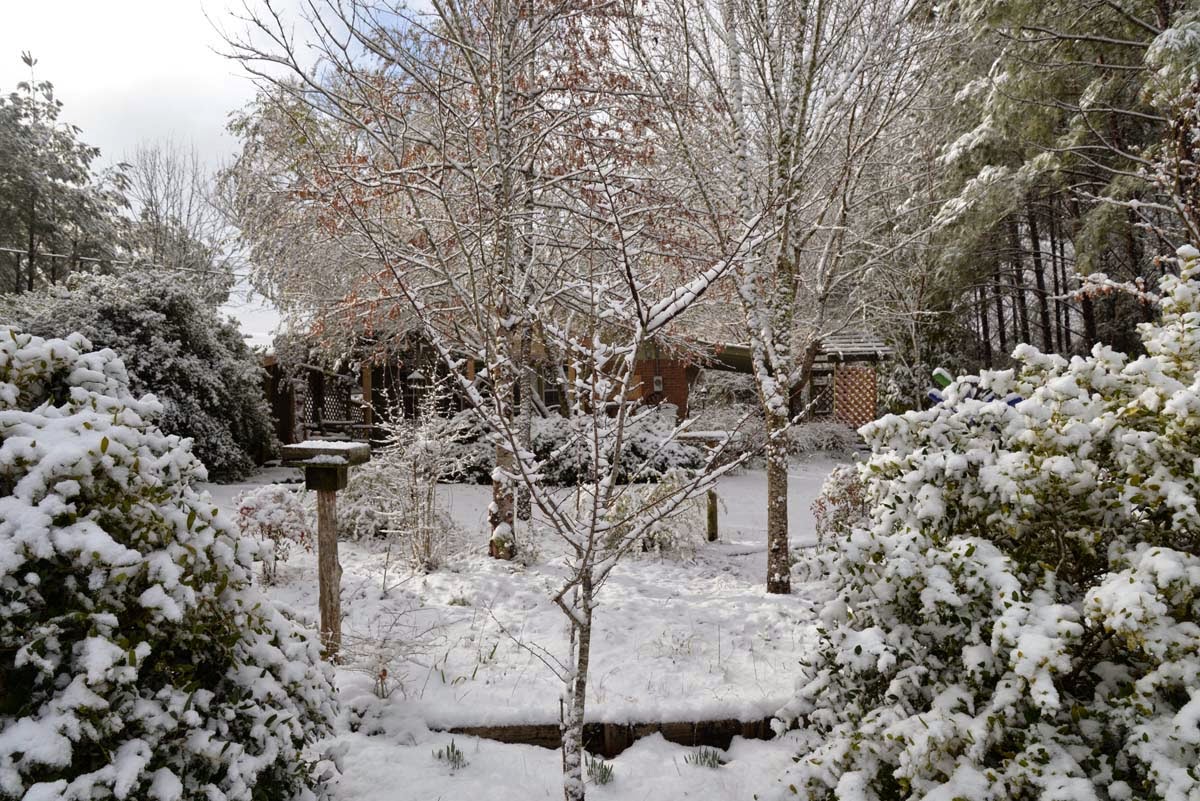 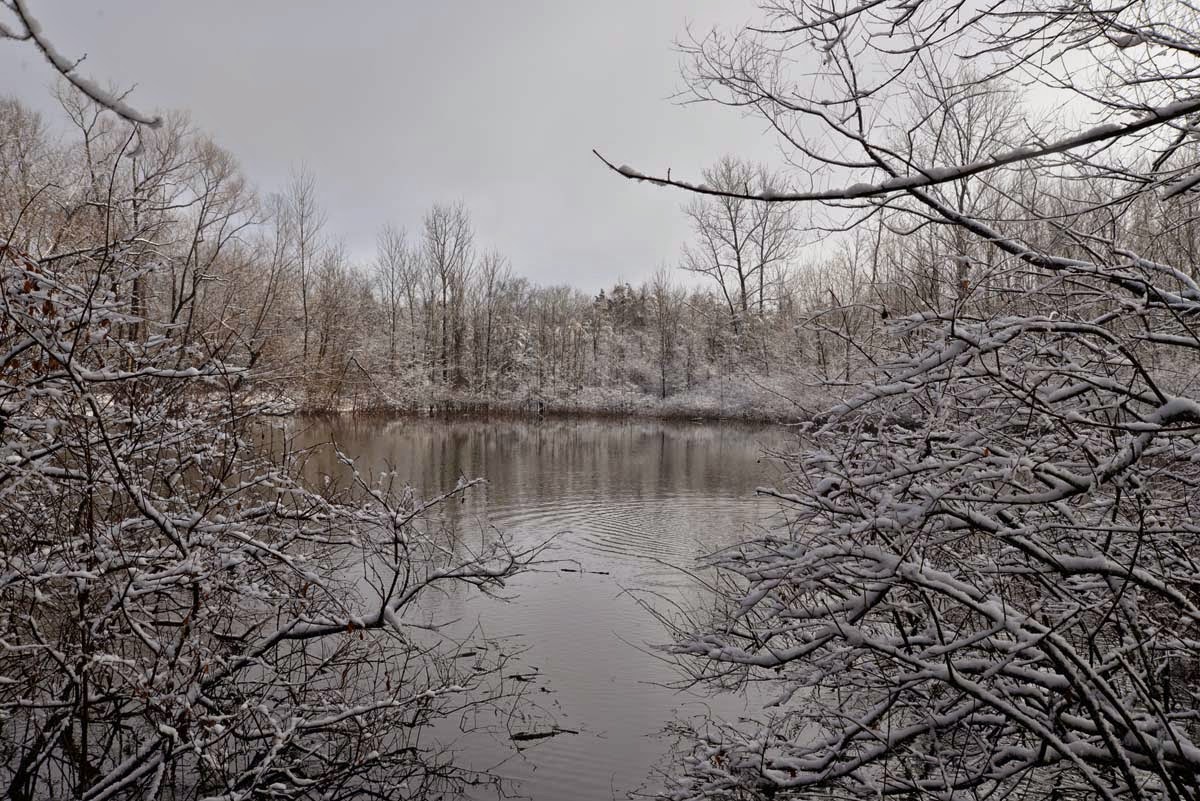 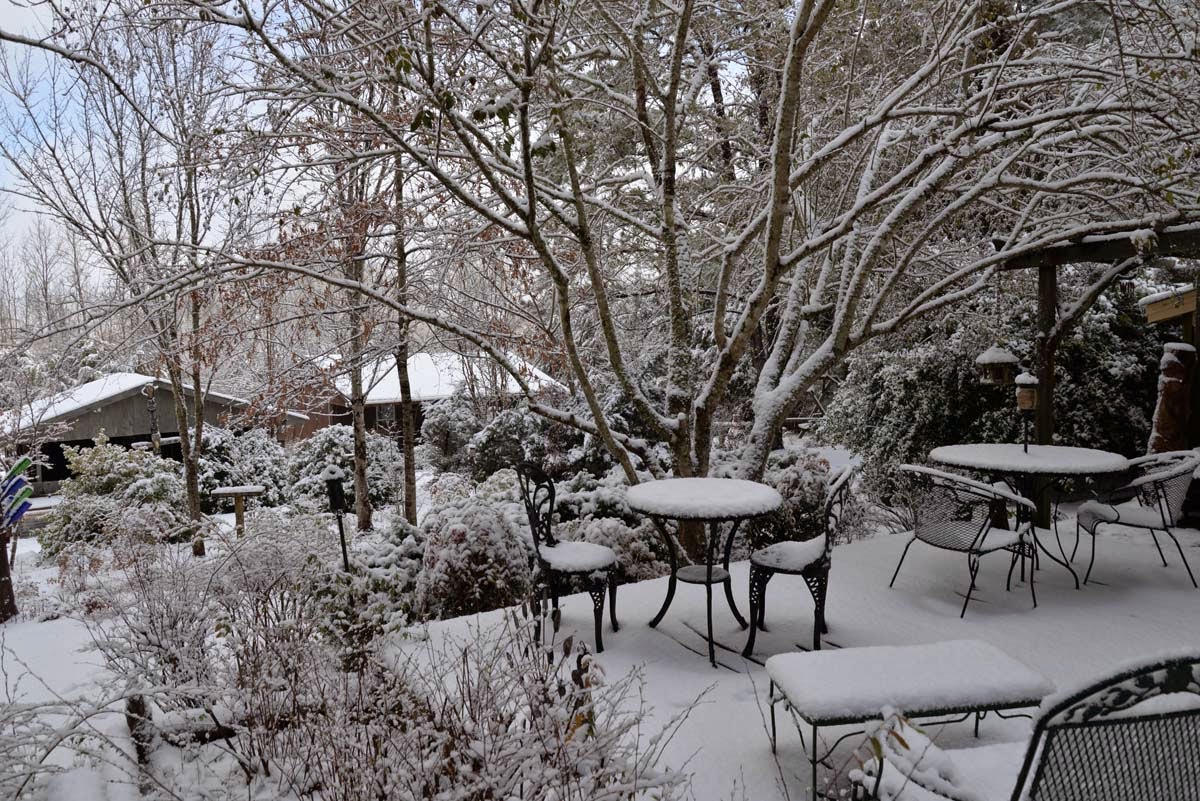 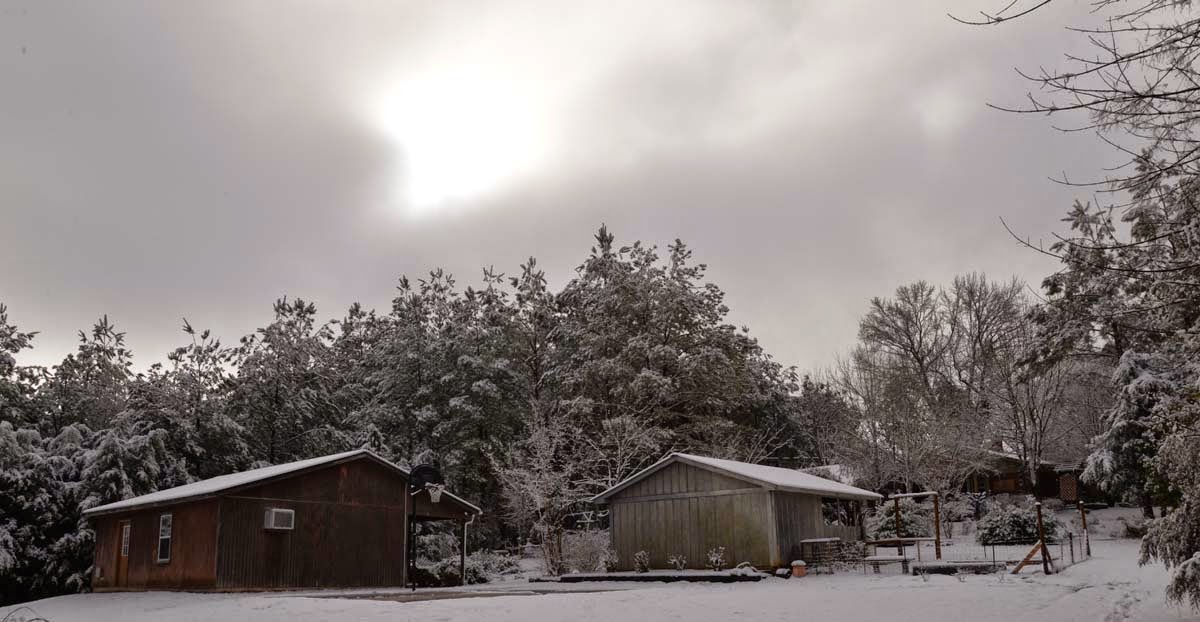 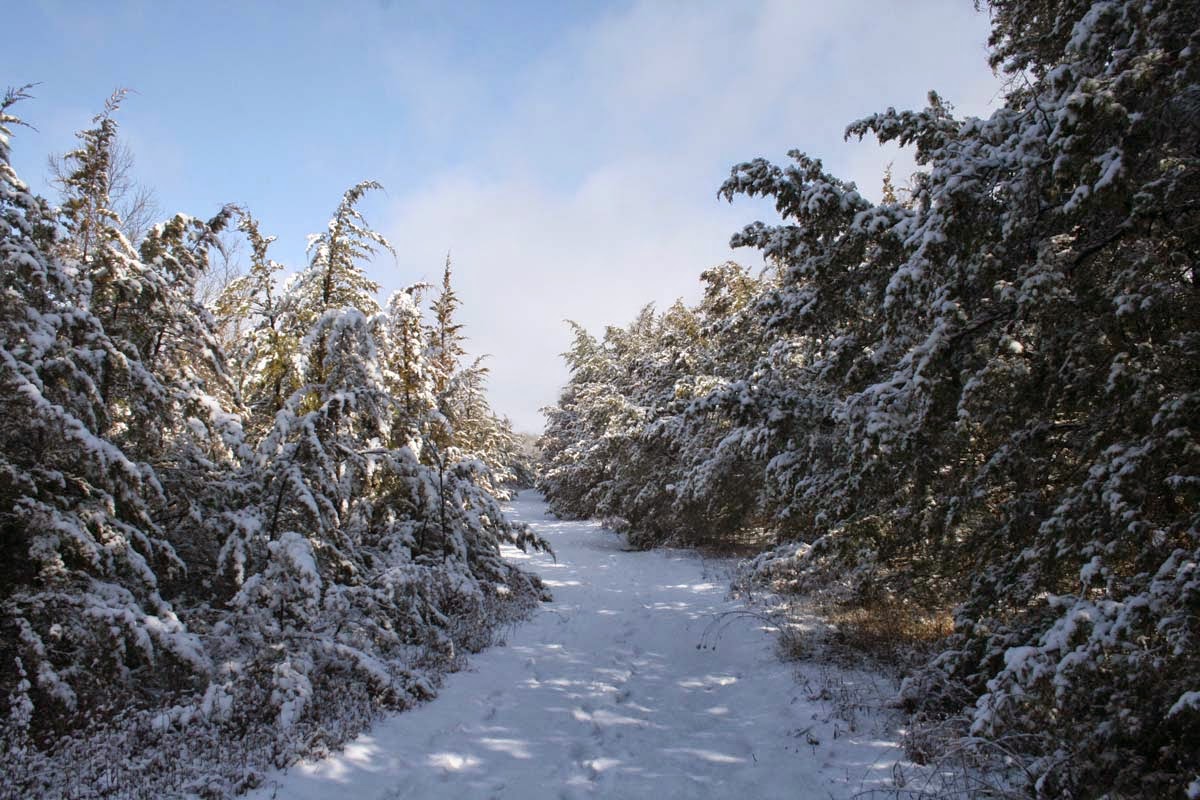 Back to the art. This latest piece I am working on is on wood and decent sized, about 3 X 4 feet. This time, I primed it with a flatter type of primer, instead of the glossier stuff I have been using. Over the last few days this week, I have been applying some colored ink with brushes, fingers, and paper towel to lay down some underlying color. Yesterday I started drawing with my Koh-I-Noor Rapidograph pens to draw some stuff on the crazy colors that I have going. It seems that as I get older, I am finding myself drawn to simpler shapes and figures, even if I create great amounts of detail within and around these figures. Also, I have noticed that certain creatures/faces/beings tend to reoccur. I am not sure why this is, but why fight it. I have this one face in particular that keeps popping up that is a simple round face with large eyes, no hair, and I would say it is more on the male side. Weird. Maybe I just suck at art and this is the only face I can draw! Or maybe my subconscious is trying to tell a long story over time with this "guy" as the main character? Well, I really don't know. Ha.

In addition to the various group shows I have been involved with locally with the Starkville Area Arts Council (SAAC), I have had art in two different shows at Luminarte Gallery in Dallas, TX. The first exhibition, "No Body, No Evidence. Right?" opened late January, and as I mentioned in an earlier post, I had a piece entitled "Zabulation" in that show.

The latest show, an abstract show of sorts, was called "Mnemosyne" and opened this past Saturday night (21 February 2015). I have two pieces in this show, "As Above, So Below" and "Convergence." These two exhibitions actually overlapped, so all three pieces are on exhibit there now. This is very cool as the LuminArte Gallery was voted the best gallery in Dallas this past year (and other years). Also, many of the pieces in both of these shows were created by artists who regularly exhibit internationally! Nice.


But wait! Theres more! I will have art in yet another show at LuminArte Gallery next month as part of the finale of the traveling "Dreams and Divinities" exhibition. This show opens on 21 March 2015 and will feature some fantastic international artists such as Patrick McGrath Muniz, Andrew Gonzalaz, Liba Stambollian, and numerous other amazing artists. To be included with likes of these folks is pretty sweet! Thanks to Matt Anzak, the art director at LuminArte for including me in these shows, and to Liba for inviting me to be a part of this last one.

In addition to these super trippy awesome international group shows, I will have two upcoming local shows here in Mississippi. The dates on these are not finalized, but basically I will be installing the first around mid March at Aust Gallery at East Mississippi Community College in Scooba, MS. My buddy Terry Cherry, a great artist and instructor at the school there, invited me over for this. I exhibited there several years ago and greatly enjoyed it. The students seemed to appreciate my somewhat strange art, and even the older folks were intrigued.

The other local show will be going up late March in the Colvard Union Gallery on the Mississippi State University campus. This will be a group show with one or two other artists. Details to come, but it should be fun.

Posted by Joe MacGown at 5:11 PM No comments:

MacGown Art Talk at the Meridian Museum of Art

Headed to the Meridian Museum of Art Saturday morn to give a talk/demo deal about how I do my weird art. Brenda Brown invited me, and we had a decent cast of mostly older artists show up. First I showed them some representative examples of my art, then I pulled numerous smaller pieces of works in progress. 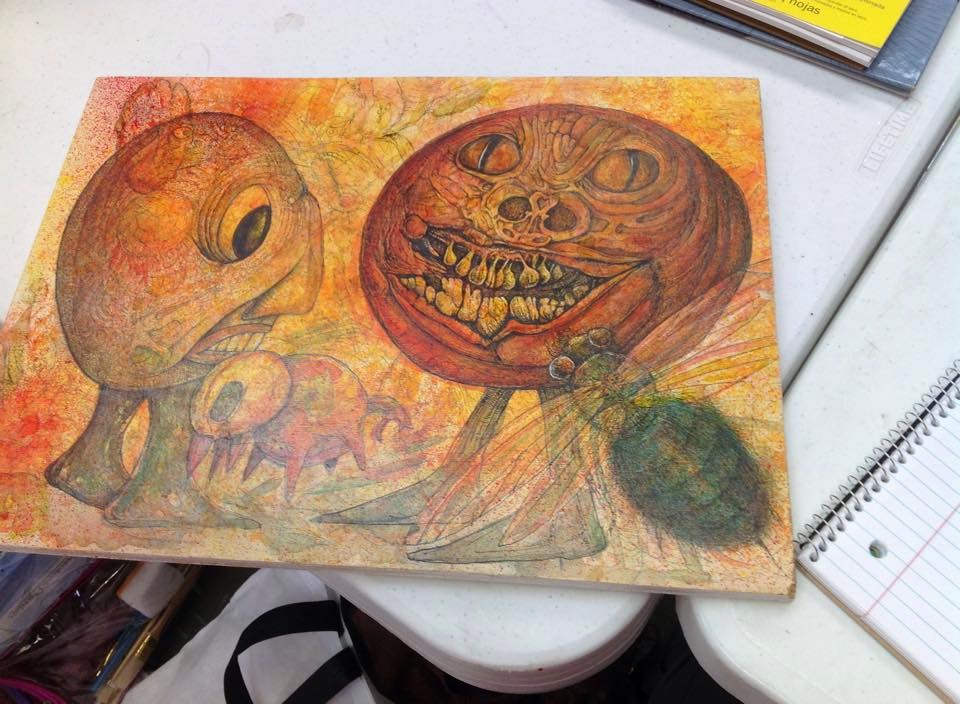 I also showed the art folks the collaborative piece I am working on with Ben Tolman, Ryan Thornburg and others. They all enjoyed seeing this and wanted to try something similar, albeit, on a small and simpler scale.

So, yep, here is some of the gang as they listened, asked questions, then spent some time drawing. 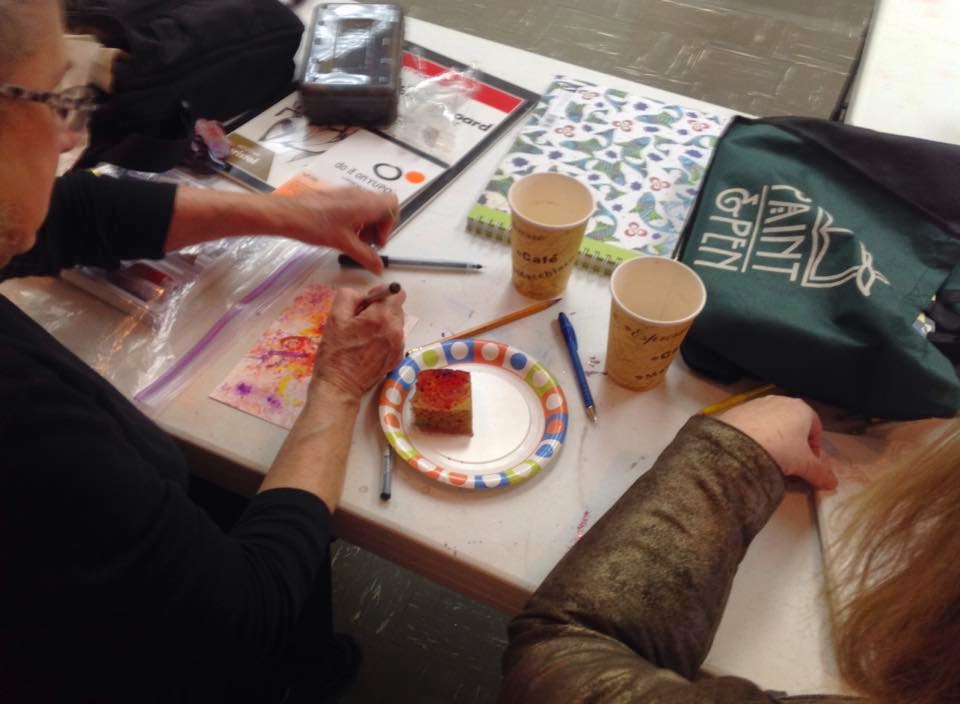 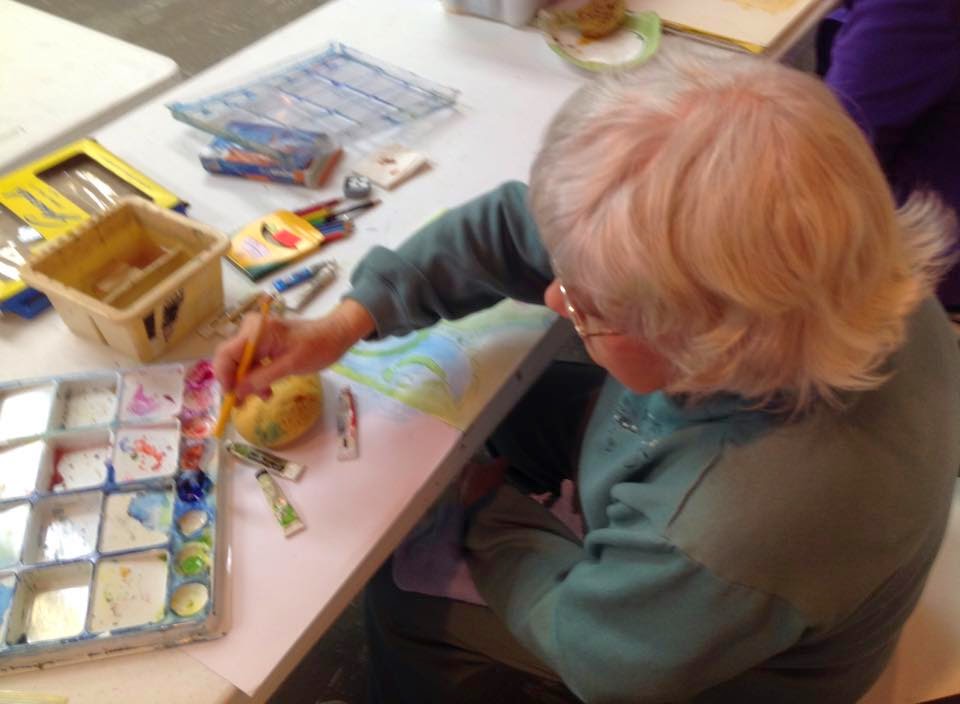 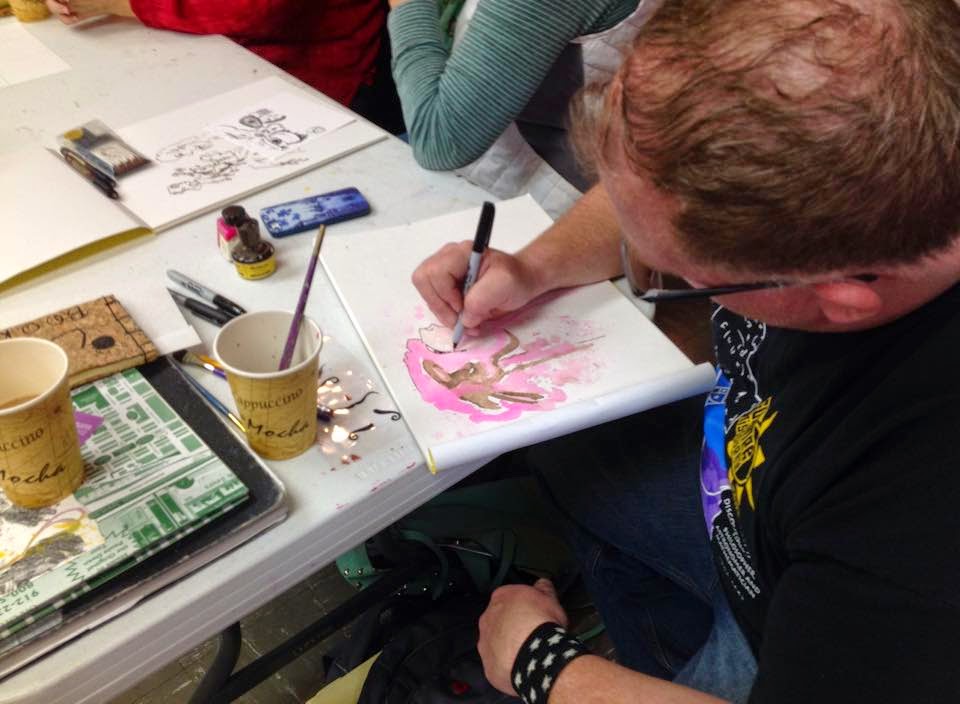 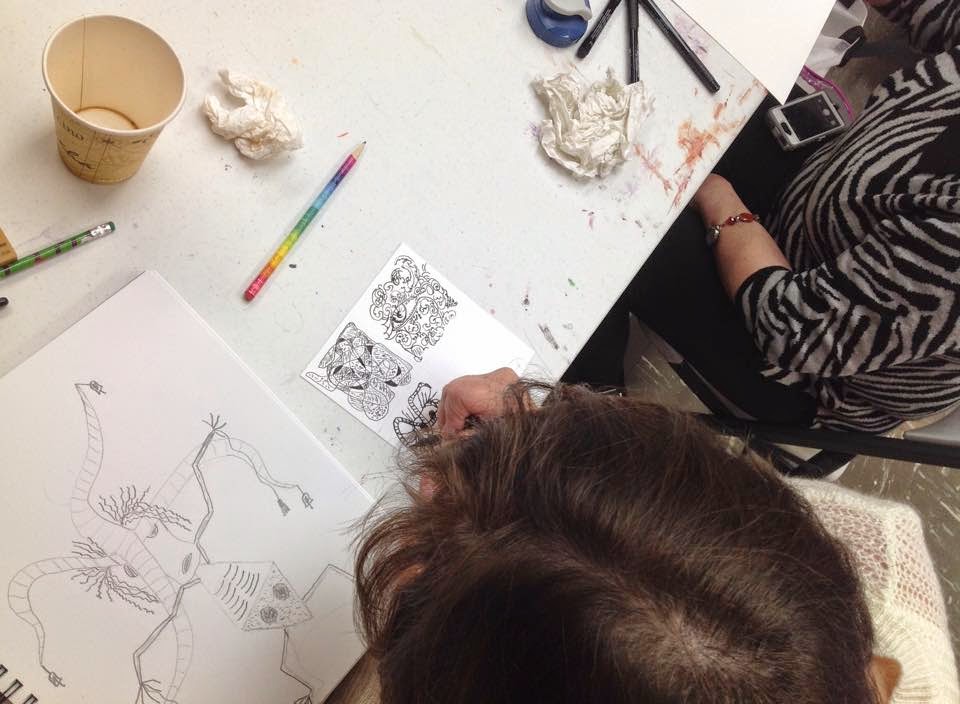 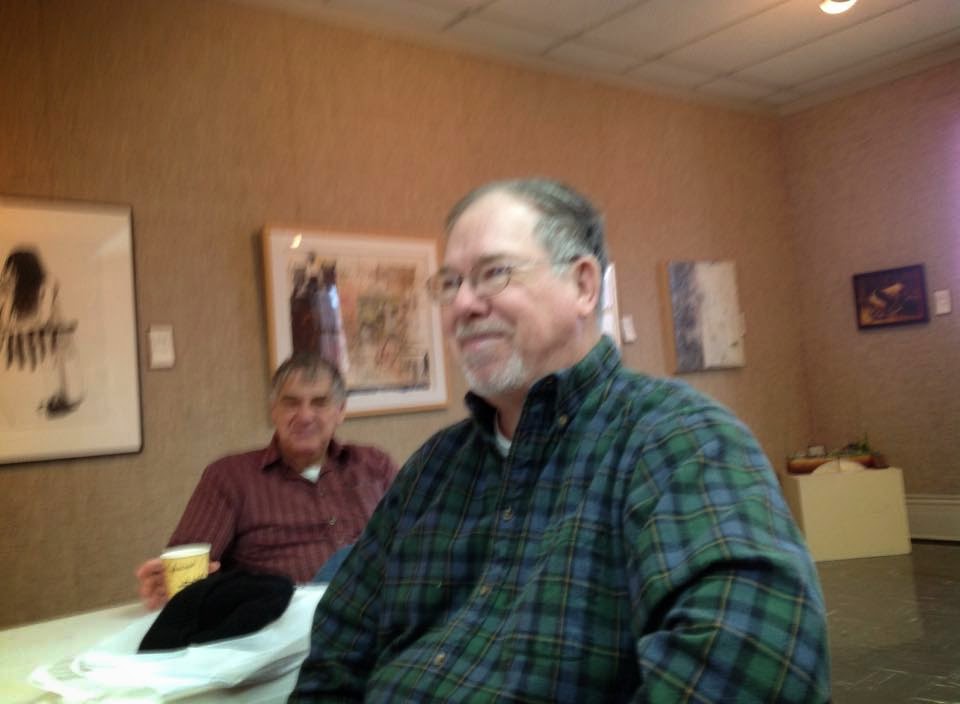 Pretty good time with the folks there at the museum, even sold a few of my books to some of them! Following the talk at the museum, I then visited the studio of Denise Dengler, one of the attendees. Brenda Brown, who had invited me down, had set this up as well, and she also came along. Denise and her husband's place in Lauderdale was a wonderful setup on 65 acres of wooded ravines adjoining a lake. In addition to her her husband's beautiful home, she had a two story studio and two additional small building where visiting artists can stay. Cool! Denise showed us lots of her colorful artwork and great facilities.

Posted by Joe MacGown at 4:37 PM No comments: