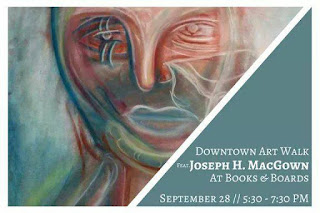 Joseph and I will be set at Books & Boards on Main Street, Columbus this Thursday, September 28 from 5:30 to 7:30 PM as a part of the Columbus Art Walk! If you happen to be in Columbus, come by and see us and hang around this relatively new cool book store. Also, numerous other downtown businesses will be a part of the Art Walk. 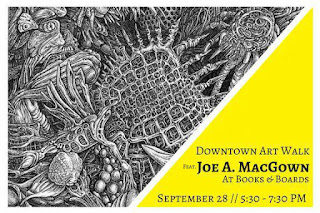 Last week was fairly busy with the Bulldog Bash Vendor Market in downtown Starkville on Friday and the Sunday Funday in the Cotton District, the latter of which is getting better every time! Here are a couple of pictures from the Bash and Sunday Funday.

We had a great time at the Prairie Arts Festival this past Saturday selling and showing our weird art. In general, the Prairie Arts Festival has become less of an art festival and more of a craft/clothing/food vendor event, but there are still a few artists participating. Although, we did note that many of the artists have added t-shirts to their sales, which I suppose basically signifies the end as far as this being an art festival that attracts art buyers. For sure that was the case this year, with what appeared to be a smaller crowd that was not into buying art. We did sell a few prints though, and in general we again shared our weird art with the predominantly ultra conservative West Point folks. Believe me, we had some awkward conversations! On a positive note, the weather was great, and I won first place in the drawing/mixed media division of the juried show!


We again have lots going on this week in Starkville beginning with the opening reception for the Starkville Area Arts Council's Abstract Show this Thursday from 5:30 to 7:00 PM at 200 Main Street. Both Joseph and I have three pieces each in this show, and several other local artists will also have their works on display. Food and wine will be available during the reception. The show will be up for a couple of months if you can't make the opening.

The Bulldog Bash Vendors Market will be held this Friday afternoon from 2 to 6 on Main Street! Joseph and I will have a tent of our triptacular art on the street out in front of the Book Mart! Come see us and the other vendors (almost 40 vendors), then hang around for the free concert starting at 7 PM. Read more about Bulldog Bash on their website.

The next Sunday Funday is this weekend from 12 to 6 PM. As usual, we will be set up with the other vendors along Grand Ru du Fromage in the Cotton District with live music and lots of fun times. Our other Fundays were on the fourth Sunday of the month, but this one and the next two are being held on home football weekends for big games. So, come see us and the others and hang out Sunday afternoon!

If you happen to be in Meridian, stop by the Meridian Museum of Art and check out the BiState Competition that is currently on display there. I had two pictures accepted into the show, "Board of Alderman" and my triptych "Pentamerous Archetypes." This show is up until October 7, when the winners will be announced during a late afternoon reception!

Posted by Joe MacGown at 6:30 PM No comments: