Started a crazy manic fish painting late Friday afternoon and early evening. The weather was fantastic, so I painted outside and also in my smallish barn/storage/workshop type building.

Fun. 2 X 4 feet on primed masonite. Used some spray paint, house paint, and some acrylic paint. Kind of slapped the paint on there and it started looking like a fish creature deal. Had some Ids music playing from inside the studio. I love the Ids! One of my favorite bands. I guess they must be fairly obscure, because no one seems to know about them.

Got a couple picts of the progress of the fish deal. Will update as it comes along. 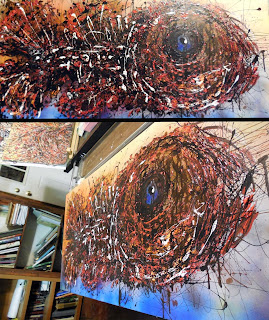 After some supper, got back in the studio to work on some stuff. One thing was my weird acrylic and oil pastel deal. Here are some photos of it. 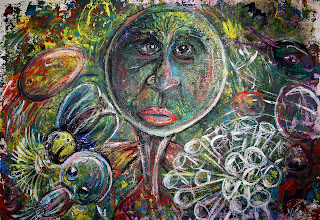 After a while, I moved to the other table and put in a little time on a bigger picture. This one is on a 42 inch by 40 feet long roll of awesome art paper. May never finish, or at the very least, it will be like 20 years from now. Have not made much progress, but like some happenings so far.

While I was working on that, Audrey, who was also doing some random artwork, decided she want to paint on my shoulder. So, yeah. She took a photo of her work on my shoulder. Interesting concept, art being done on artist doing artwork.


Not sure why, but I seem to love painting and drawing fish and other fishlike things. Some people might think its some sexual bullshit, but honestly, I just think fish and fishlike creatures look cool as hell. Jellyfish too. Nothing wrong with freakin jellyfishes! Fascinating creatures.

Also worked on this thing for a bit. Kooky creature guy. Part of bigger picture. 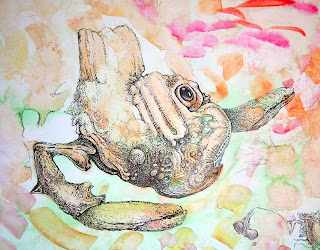 Posted by Joe MacGown at 3:45 PM No comments: